KETIKAN
Kamis, 24 Mei 2012
Facebook Twitter Telegram
Presented herein is a excerpt of an upcoming free book which aims to provide a starting-point for web-application developers or programmers who would like to venture into web-application development for the field of metabolic biochemistry and related disciplines. 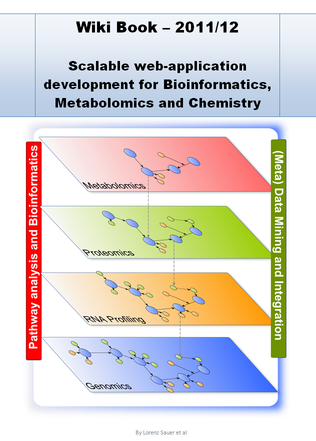 Motivation for venturing into metabolic science:

An example of a metabolic disorder is diabetes. Diabetes itself is attributed to both hereditary and environmental factors and involves the sufferer having an abnormally high blood sugar level [1].

The provision of the book is based on at least two authors collaborating, to summarize and abstract the key concepts of modern web-authoring and application building within the framework of biological and chemical sciences. After sufficient initial feedback, a publishable version should be ready within this year. This version will eventually transition to a web site and set a starting point for a curated, up-to-date wiki-book that allows anyone to contribute information on the rapidly expanding field of metabolic sciences related to the scope covered by the book.

Part I will provide concepts of the Web and its technologies in relation to scientific application authoring, Part II then directly steps into algorithmic concepts and user-interface aspects to discern, backend and frontend aspects that would ground a presumed web-application.

No similar literature exists at the moment, that would provide a concise reference focused at the specific and emerging scientific field of metabolic data integration, nor would it be attractive to publish, due to the potentially narrowed focus of the book. For the reader, the offered incentives are up-to-date, directly linked references, and information that pertain to their field of interest.
Primarily the book is targeting audiences, already well familiar with computer languages, but not necessarily with biological sciences. The guiding theme is the utilization of state of the technology such as sandboxed Browsers and HTML5, distributed service-oriented software in the context of Cloud computing, and efficient data aggregation and processing scenarios of metabolic related data. Naturally web-applications bring their own set of perks but also faults and shortcomings which are discussed and tried to work around, in the context of the current generation of web-browsers. Overtly, web-applications and the large data files encountered in metabolic sciences don't mix well, yet this issue has to be addressed for web-applications to become viable in the field of metabolic science. This issue is dissected in the second part of the Book

Background
With roughly 30 Omics fields, and ever expanding diversification and specialization of scientific knowledge, the book has to narrow its focus on one or two scientific subfields, in this case metabolomics, as part of a subdiscipline of metabolic science. Metabolomics is an emerging endeavor that arguably fits somewhere in the hierarchy of the dogma of molecular biology (see book-cover). Metabolomics has archived good results with commercial applications found in biomarker discovery and finding targets for genetic engineering such as growth optimization of algae in biofuel-related green energy research, and in plant stress to increase resilience towards stressors. On the other hand, the outlook of under-girding systems biology with hard data for the construction of bottom-up in-silico molecular models for entire biological systems, is bleaker:


How?
Unlike scientific publications, all links or publication references are directly inserted at their source of citation - or hyperlinked in the case of the resulting wikibook. As a web-page, interactive examples may be provided, along with github embedded code-snippets which can be cloned to a user-account to be modified and tinkered with. The book may eventually seek crowd-funding at some point, with donations shared between the top-contributors, should it find its intended audience, to increase quality, expand code examples and improve clarity - cumulative virtues rarely found in the form of one single author.

References to up-to-date bibliography and sources are provided, and the book is completed to around 3/4.

Any prospective contributors, and interested readers who want to provide feedback are hereby cordially invited to join this effort. I am reminded every day, through potentially hundreds of google searches, just how important community knowledge is, in the information age, and how fast information can turn obsolete.

Assisting scientists in the goal of writing better scientific web-tools, that unburdens peers in their everyday information-rich world, is part of the declared goal of this book.

Following is a short excerpt of the chapter introducing the R-programming language: