Proteomics: Back from the Late Summer Practical Proteomics Seminar

Following are just some quick notes or keywords:

For MRM: Optimize the collision energy / ideally with the excitation time as an tunable parameter


Cycle time should be at least 1/10th of the peak elution time (less critical with schedules MRM, i.e. extract information which regions in time require the most "bandwidth"; a concept which reminds me of two-pass video encoding. Might have even borrowed some algorithms from there.) .
The target scan time has to be kept fixed, for reproducability.
AB-Sciex has its own proprietary wiff format. To get this converted into an open format it is best to use the netCDF format. (Analyst software - with IMHO very little changes over the last three years)


A few notes on 2D-separation:
2D Offline HPLC separation offers far greater flexibility and is ideal for method development. It is important to ask is my first protein after time x (which passed during the procedures) still the same protein?
E.Coli sample (>1000proteins) separated, with good result on a WAX column but little separation effect on a SAX column (this might imply purification of the manufacturer based on SAX and a significant bias introduced to the -in this case- BioRad standard)

Retrofitting / Upgrading a system to 2D:
Install an 8port sample valve
Use columns with "orthogonal" characteristics with the crucial separation phase taking place in the second dimension (I disagree) Orthogonal parameters would be for instance those of 2D-PAGE: Charge and Hydrophobicity (actually rather the hydrodynamic radius)
-- Native protein separation might be the next big thing? Far more information is retained. (But IMHO none of the deal-breaking issues of native separation  were discussed.)


SEC: Is technically not even a chromatography (since molecular interactions are not part of the essential partitioning steps). Sample loading is paramount in such diffusion-driven systems.

HILIC: Hydrophilic interaction chromatography, is part of the normal phase liquid chromatography repertoire. It's driven by a liquid-liquid partitioning mechanism. Basically an organic modifier precipitates the PoI out, and by gradually ramping down the concentration of the organic modifier, the solubility of the PoI increases. 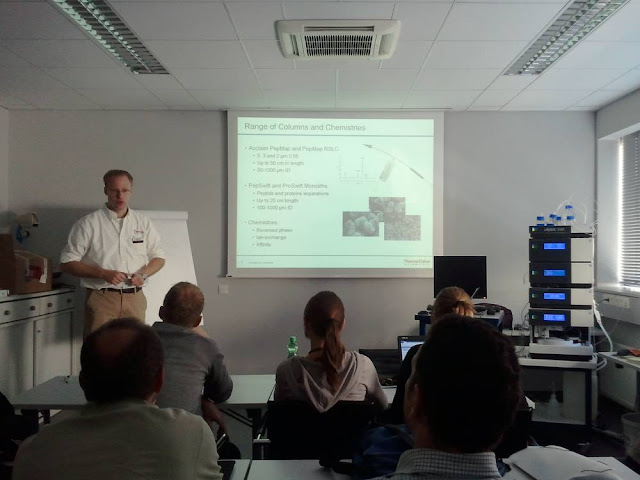 What if god was wrong? -  Nice font-setting, is that 420em justified Tahoma or Verdana?

(Picture: people in line for food at the IMBA Plaza) 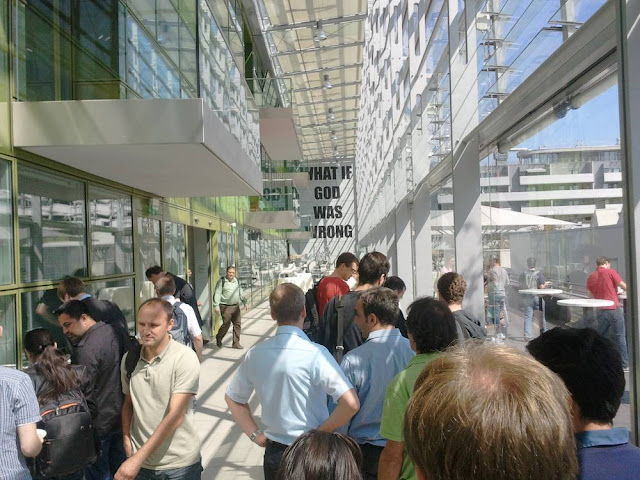